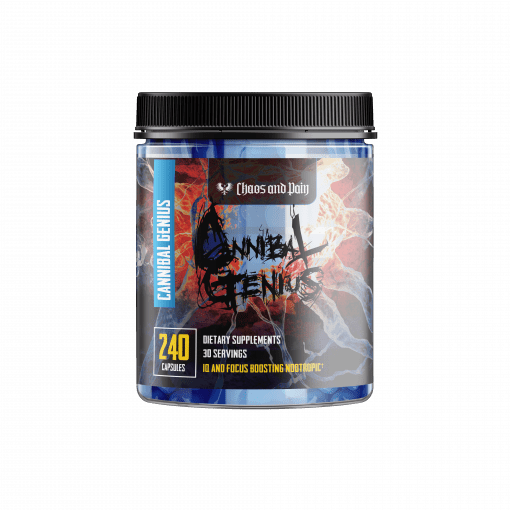 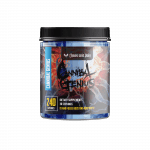 One can never, ever be too intelligent, but this is Chaos and Pain’s attempt at getting us all to the point where people start remarking that we might be a little overly intellectually intimidating. Cannibal Genius, one of Chaos and Pain’s nootropic supplements, will put your brain on hyperdrive, nothing on Earth can touch this blend for focus, memory, cognition, and mood,

Each serving of Cannibal Genius contains:

L-Tyrosine.  Though it’s one of the old guard of nootropic supplements, it’s hung around as long as it has because it works.  Two full grams of L-Tyrosine will ensure that you will have maximal cognitive function under less-than-optimal situations, most notably those which are stress- and anxiety-filled.

Alpha GPC.  This particular type of choline has proved remarkably adept at increasing power output and in improving cognition.  Cannibal Genius contains 600mg of the stuff, the exact amount used in one study to increase growth hormone production, which means this magical stuff can do everything from reduce the effects of Alzheimer’s (in double the dose used here) to improving general cognition to improving power output on the bench press.  Additionally, it is essential if you plan to stack Cannibal Genius with non-supplemental cholinergic chemicals to enhance cognition.

Lions Mane Extract. Also known as yamabushitake, this is a mushroom native to Japan that has been shown to reduce anxiety, depression, and cognitive decline.  Cannibal Genius contains 600mg of this mushroom extract to create the calm focus you need for any kind of intellectual pursuit.

Beta-Phenylethylamine. PEA, otherwise known as beta-phenylethylamine, is a fast-acting, naturally occurring trace amine neurotransmitter that improves creativity, sexuality, mood, mental activity, attention, motivation, alertness, awareness, energy, and sensory perceptions.  Cannibal Genius contains half a gram of this stuff, so you’ll be shot out of a cannon and grinning like an idiot as soon as you enter that test, business meeting, or whatever you need to be at the top of your game for.

Bacopa Monnieri.  We threw 300mg of this herb, which has been shown in research on humans to reduce or remove social anxiety, such as fear of being judged or inhibited, in addition to reducing or eliminating issues related to depression, to ensure that when you make a statement on this stuff, you have the temerity to make it authoritative.

Caffeine Anhydrous. Caffeine is the mother of all stimulants and a potent nootropic as well.  With the combination of caffeine and PEA you’ll be wide-eyed and alert, but cheerful and without anxiety.

L-Theanine.  L-Theanine elevates levels of the neurotransmitters GABA, serotonin, and dopamine, as well as promoting a state of wakeful relaxation by enhancing alpha brain waves.  Cannibal Genius rocks out with 200mg of the stuff to keep that wild-eyed, big-brained energy roaring through your veins nice and cheerful.

Cannibal Genius.  It might not be magical, but you’d have to take a bunch of it to learn the vocabulary adequate enough to describe its effectiveness at turning an everyday human into a cheerful, energy-filled maniac.

There are no reviews yet.

Be the first to review “Cannibal Genius Nootropic” Cancel reply